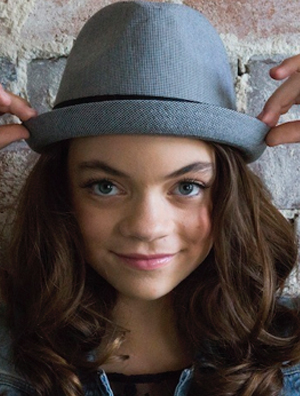 It was during a revival of ‘Young Talent Time’ when judge Tina Arena compared Harmony Lovegrove to a young Barbra Streisand. Among Harmony’s accomplishments include being a finalist in Australia’s The Voice Kids and being a featured artist every year in Schools Spectacular since 2010. She’s also the youngest to be accepted into Sydney’s prestigious Talent Development Project. Harmony’s played the lead role of Grizabella in Cats and The Narrator in Joseph and the Amazing Technicolored Dreamboat, both produced by Packeman Production Company.

Take into account who her parents are, Harmony’s musical career seemed inevitable. The chosen name they gave her is the true icing on the cake. Her father, Darryl, played the title role in the Australian and New Zealand productions of Jesus Christ Superstar over 20 years ago. He featured in the original Australian casts of Les Miserables and Chess. Her mother, Andie, performed alongside a very young Russell Crowe – or Russ Le Roq as he was known then – in the Kiwi production of The Rocky Horror Picture Show.

These days, Harmony and her dad sing together doing corporate and charity gigs. The duo won ‘Entertainer of The Year’ at the 2012 Australian Event Awards. When she’s not on stage, Harmony loves cartoons, making short films and writing stories.